Happy New Year, yes I know it's a week late but I have been busy.  Well, sort of anyway.

So Christmas came and I got what I had bought for myself and then given to the family to wrap up for me.  So a couple of Airfix 1/48 modern kits joined the "to do" pile, a couple of rulebooks joined the ever increasing shelf of rules and some figures joined the painting list.  The surprise was my Secret Santa and I can only say a big THANK YOU to whoever it was.  I received four extremely well painted WW2 28mm figures which will join in the forthcoming Chain of Command games. So here they are in all their glory, sporting an apparently "modest" paint job.  Puts my work to shame. 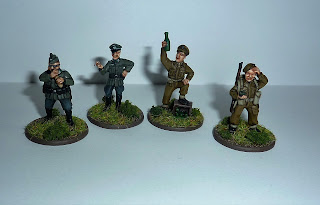 The rules I got were a physical copy of Kings of War to replace the free set from the Mantic website and a copy of Dan Merseys Dragon Rampant.  The plan is to inspire me to paint some of the hordes of Lord of the Rings figures I have here.  That was the plan anyway, but the "ooh, shiney" syndrome has kicked in already and buggered up my plans for 2016 within a week.

Anyway, we gathered for our annual all day game at Zob's on the 28th and played a cracking game of Zulu.  More information can be had on Nathan's blog, but fair to say a good time was had by all.  After tea and biscuits we finished the day off with a game of Zombicide:Black Plague and just managed to win it, which was nice finale.

I then managed to get an infection in the partially done root canal work the dentist started back in early December.  Typically it kicked in on New Years Eve, after the dentist had shut for 3 days.  Luckily I got in to see the emergency dentist on the Sunday and got some anti-biotics and pain killers to tide me over.  Unluckily the infection was still there when I went to have the root canal finished and she couldn't do it, so I am back there in 2 weeks (hopefully).

So while I was in pain and grumpy I stayed out of the familys way and looked at my projects for 2016.  As I said in my previous post I have a few projects on the go.  They have now been joined by a new one, more about which can be found at the end of the post.

After the New Year we played a game of Kings of War, 3000pts a side and 3 players a side.  Opinions were mixed, the 3 "elder statesmen"(50 plus) of the group were not overly impressed while the three "young pretenders" (in our late 40's now) liked them and plan to play them again.  So that was good.

Painting wise I have done very little really.  I still find it hard to concentrate, although being up all night for a few days did allow me to get some paint on lead plastic.  So here they are, just waiting on some bases to arrive from those nice people at Warbases. 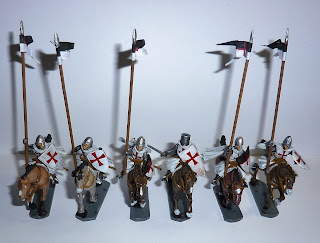 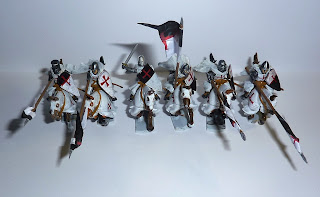 Fireforge Games Templar Knights with decals from Battle Flag.  One box gives 12 figures which is enough for 2 units in Lion Rampant.  I have decals for the Hospitallers, Knights of Jerusalem and Knights of Ibelin as well, so things are moving in the right direction on this project.  Just a few more to do, I have plans for about 120 cavalry and over 200 infantry in the end.  Yes, I know that Lion Rampant is a skirmish, but I want enough to do big battles as well.

Finally we come to the first unexpected new project that has already screwed my plans for 2016. I have pledged for this 15mm Cold War kickstarter to give me some Cold War British.  If I can afford it I will up my pledge later to get some VDV too, but I really want the British.  I am in for a platoon so far, but will be adding some Chieftains at the least.  This could get ugly!

So, there it is.  I am still ticking while waiting on the hospital to "get funding" for a gastric pacemaker so until then I will be up and down health wise.  Gotta keep smiling though, so bear with me folks.  Have a good one until next time.
Posted by jcralls at 22:04