Legionary 2015 and other random stuff

Been a bit tom-and-dick so apologies for the lax postings.  Luckily things will hopefully be improving in the sickness area as I am off to get fixed(hopefully) on Tuesday.  Wish me luck.

Last week was the annual Exeter wargames show, Legionary 2015.  Excellently hosted by the Exmouth Imperials wargames club as usual, it proved to be a cracking show and I spent way more than I planned too.  There is a nice set of pictures on the Wargames, Soldiers and Strategy website, so pop along and have a look at much nicer pictures than the ones I take. 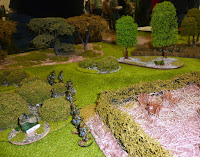 Nathan and I put on a game of the forthcoming Cold War Chain of Command game.  This is in an early stage of playtesting and we are luckily involved to breaking playing them.  A small game involving a meeting engagement between to recce forces. A Russian mech infantry platoon with 2 MBTs and an engineer section in support bumped into a British infantry platoon with 2 Scorpions in direct support, plus a Chieftain enroute.  It played pretty well, the Russians pushed forward as fast as they could, nearly wiping out a British section as they got several phases in a row.  It didn't help that I couldn't hit anything with the Carl Gustav rocket launcher.    The Russian tanks pushed forward, laughing at the Scorpions 76mm HESH shells.  Then a BMP-1 exploded, hit by a mighty 120mm HESH shell from the Chieftain as it arrived.  Another BMP brewed up, then one of the T-64s exploded as an APDS round tore through its armour.  The rules worked pretty well, considering that they are in an early stage of playtesting.  Light armour is very very fragile, being bullet, but not mush else, proof.  I will probably end up spending a small fortune on 15mm figures and vehicles for this period to replace my small forces of 28's, as then I can use my existing terrain.  Plus I think the game plays and looks better in 15mm. 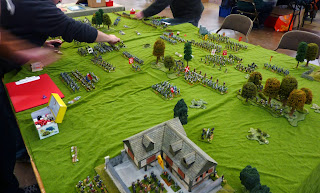 Other games at the show were varied and all looked nice.  Graham and Dave put on a 28mm Medieval battle.  Lots of stabbing and slicing occurred and much carnage was wrought.


Another large Medieval game, was also there.  War of the Roses I think.  It looked very nice and the scenario included a very large flank march by one of the forces, but there was only a small bridge for them to cross. 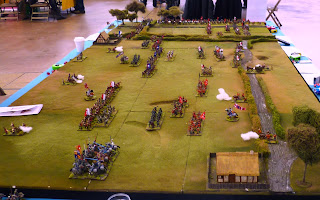 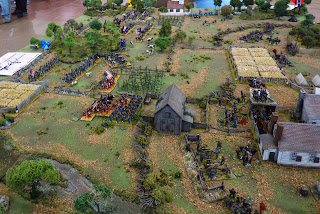 There was a beutiful 28mm ACW game that looked excellent with lovely figures and cracking terrain.

Another 28mm game was played using Under the Lily Banner I believe.  Plenty of colourful troops contested a sizeable battlefield.

Something different now, 1/600th ironclads from the Russo-Japan war.  The models were beautiful and it looked really good.  A fair few pounds had been spent on those ships. 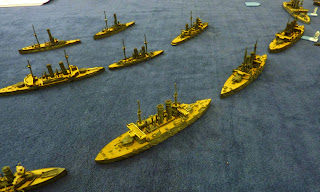 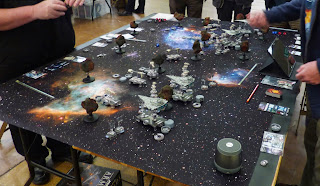 One game that I was interested in, but never got a chance to try, was Star Wars Armada.  It is nice to finally be able to command a Star Destroyer on the table, but I am loath to fork out £80 for 3 ships without first trying the game.  It does look good and I have heard and read some good reviews of it, but the price for the ships may be a killer blow at the moment.  Plus the Imperial Star Destroyer isn't out yet!

All in all it was a good day out.  I managed to last until after 4pm, which was good but I did pay for it over the next couple of days.  I bought a couple more 4ground buildings, 2 technicals in 28mm(WHY?), some bits and pieces for my 1940's forces from Peter Pig(nice to see them back), some 15mm Landmark buildings(too good a price to miss) and several books on the bring and buy.  I meet some old friends that I haven't seen for a while and meet some new friends as well.

That's it for now.  There will be another update tomorrow with my painting efforts and yesterdays Devon Wargames meeting.  Keep rolling those dice folks, they can't all come up on a 1........can they?