The Saxons stole my denarii!

Thor Nogson was not a happy Saxon.  He had spent all his hard stolen loot in order to be recognised as a lord, somehow gaining him the name of "Thor the Simple", and now he had to find some more right quick!  Ah well, there are always more Britons to kill and he had a good bunch of hardened warriors ready to follow him, at least until his money ran out.  His informants had told him that a British village was loaded with loot, having had a good harvest and escaped being raided last season.  Time to sharpen his sword and gather his men. 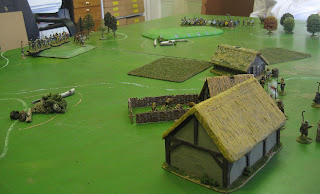 He called his lieutenants to him and gave them his orders.  Thor Hiadal was to take 2 groups and gather the loot while "Grolish the Generous" was to stay close and help control the other 3 groups. As the advance began the lead men reported back that there were already some Britons ahead and they were forming a shield wall already.  Damn them, how had they known where he would attack?  Still, the decisive Saxon gets the loot, onwards boys and put them to the sword.  He saw Hiadals unit moving off towards the village as he led the rest to stop the Britons from interfering. 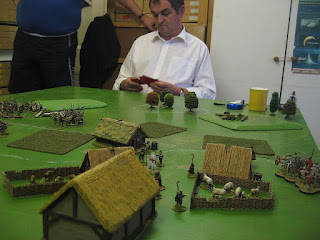 The main Saxon force advanced to pin the British while the other force used a fate card to move 4d6 towards the village.  The Romano-British Dux came on with 1 unit of companions and 1 of warriors behind the levy.  The British were in the wrong place to secure the village from the Saxons.

Thor Hiadal looked over to his right and saw more and more Britons coming off the hill.  "Nogson's going to have his hands full" he thought as he loped towards the seemingly empty village.   As he watched the Britons formed a shieldwall, but it looked shaky as they all seemed to be farmers with no armour or even helmets.  The troops appearing behind them on the hill looked to be a better class, but the front line was definitely not made up of quality troops. 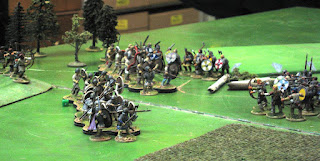 The Britons formed a 2 unit shieldwall with their levies, facing off against the Saxon companions!  Meanwhile the better troops were strolling down the hill (3d6 came up on 5 for movement).  The Saxons charged the shieldwall and were repulsed.  The gave out plenty of shock, but failed to kill any levies due to their shieldwall.  The remaining units of the Britons arrived behind the village.  Could they reach the Saxons before they found the loot?

With a roar Thor Nogson sent his men forward.  Shields splintered and spears were sundered as the best of Saxon manhood threw themselves at the farmers.  Men fell and blood flew, but it was Saxon blood and, as his troops staggered back in shock he saw that the shields were still locked, while two of his men lay dead on the ground.  At least the others had reached the building and were heard smashing the place up looking for the loot.  The sentry he left outside suddenly shouted a warning and ran into the building as more spears appeared beyond the village. 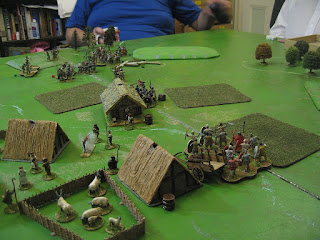 Thor Hiadal searched the first building with his men.  Dux Brutus steadied the shieldwall, taking off most of the shock, while the Saxons readied themselves and charged again.  The Britons on the hill moved down and cam towards the village, led by "Octavious the Impaler".  The reinforcements, led by Titus Duksas, moved as fast as they could towards the village.

Again Thor Nogson ordered a charge and again his men roared!  More carnage was wrought and this time small gaps appeared in the shieldwall, but more Saxons again fell and the Saxon warriors fell back in dismay.  As he glanced to the left, Nogson saw Thor Hiadal leading his men from the village, closely followed by another bunch of British warriors. "He better have the gold" he muttered, before turning back to the battle and seeing that he was in danger of being outflanked.  "Fighting withdrawl" he bellowed and watched as his warriors closed up and began shuffling backwards.


Despite their best efforts, and despite winning all the fights and killing plenty of Saxons, the Britons were unable to catch the retreating Saxons.  Thor Nogson kept enough pursuit cards in his hand to win by enough points to gain a Thiefs Horde of treasure.  He did lose the fight, but got away and will return next month.  Brutus, because of his masterful command of the troops he had, has refilled his ranks and will be waiting for the next Saxon raiders.
Posted by jcralls at 12:03