Happy New Year to you all, I hope it's better than last year. Although it's not off to a great start with a new national lockdown here in the UK.

Anyway, fingers crossed and all that. I have been a bit productive over the Christmas break, cracking on with the Wars of the Roses figures I mentioned last time. The eagle eyed amongst you may have noticed that I painted a few of the Perry Miniatures figures back in 2012 for a Christmas game at Devon Wargames, sadly they were sold on some time ago due to lack of use. So now I am painting more of the same again.

So, here we go. Just the infantry done so far but there will be some cavalry done at some point. All these figures are Perry Miniatures plastics, bought 2nd hand at one show or another over the last few years. The revival in the period for me has been caused by the arrival of the Never Mind the Billhooks rules. These rules use units of 6 foot for skirmishers, 12 foot for everything else and 8 cavalry for mounted units. 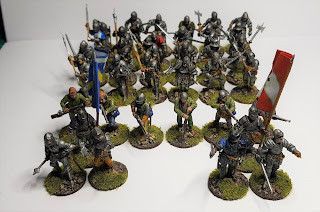 First we have 24 foot men-at-arms, 6 hand-gunners , 4commanders and 2 standard bearers. That's enough for 2 units of men-at-arms, a unit of skirmishers and up to 4 leaders.

Next we have the blues, blue and yellow on the left with blue and white on the right. Each group has 12 archers and 12 billmen, along with a 3 man command group with matching flag. I do need another musician for the blue and white unit though. An extra man-at-arms has stood in for now.

Finally, for now, we have the red and black/yellow units. Again each has 12 archers and 12 billmen with a command group of 3 men, both with musicians this time. That lot gives me about 150 points worth of units, so most of the way to a 100 points per side game.

All told that is 144 figures finished so far, with another 52 foot and 40 odd mounted waiting to be painted. The extras will add another bill and bow combined block, an extra unit of archers, some crossbowmen and a couple of units each of light horse and mounted men-at-arms. That should be enough for a small scale skirmish I hope.

Adios for now folks, stay safe and I will catch you next time.